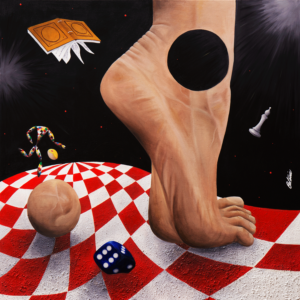 In this painting Cesare Catania returns to the character of Harlequin. The latter is intent on playing chasing his head, as is usual for the author a sign of lightheartedness, despite being in a world full of difficulties, the land of the giants. Harlequin is painted in the plastic posture of the athlete that is running, as dynamic and fluid as all the rest of the scene: the foot of the giant in full swing, the bishop is falling towards the ground, the dice has just fallen onto the sand chess board. In the distance a book that unfolds the wings over the scene.

Many reminders to previous paintings by the author. In addition to the Harlequin, we find the book already present in “Summer Readings” (it’s about the “Theory of Shells and Thin Membranes”, a tribute to Pier Luigi Nervi), we can find the white and red chessboard and the bishop in “Chess”, as well as the recall of the difficulties encountered by the protagonist in this case symbolized by the land of the giants.

It must be emphasized that in this work Cesare Catania decides to represent the giant as almost a photographic realism oil painting, in a clear contrast to the rest of the scene, assuming instead the warm and surreal colors of childhood cartoon realism. The chessboard on which the scene is played is technically made with sand and ground coffee mixed with oil paint, to create the prospective effect of the proximity of the close-up of the picture and the distance of the foreground. The sand used is in fact of variable granulometry, fine in the background, large grain as it approaches the close up.

In the lower right the giant’s ankle, which, during the rapid movement of the latter, is rolled away and is standing motionless on the sand.